Social Media platforms are both a blessing and a curse. Like most tools that allow people to find and share information, social media platforms can help people find long-lost connections, can help others communicate in an emergency, and help people start out a side business or a hobby.  It can, however, just as easily serve as a place to manipulate strangers, spread false information, or serve as a battleground for a deluge of unnecessary arguments.  And when a social media platform does not have proper checks and balances, especially one so integrated into most people’s daily lives, it can do a lot more harm than good.

Anyone who has ever participated in some social media platforms in the last couple of years knows what Facebook is, and the different ways that people use it. And anyone, who has ever watched a news station for the last couple of weeks, knows about the investigation of Mark Zuckerburg by the US Government. Since the debacle, Facebook has been making multiple publicity ads promising the removal of spam and fake news from their platform. The questions that have plagued my mind from all this are simple. “How did we get here?”  and  “How does it all work?”

That’s why the next few articles are dedicated to finding out how platforms like Facebook got into the mess they were in, and what could be done to fix certain problems.

What’s up with Clickbait?

One of the most annoying thing in the world to deal with is clickbait. It is annoying to be surfing on social media only to find a sudden pop up about a political campaign, or an offer that is in no way related to what is happening in your life. It is a pain to scramble for the volume down button in the doctor’s office when you hear an automatic ad playing on your phone. So, if these ads are so annoying, why do social media sites host them so much? The short answer is profit. The long answer is a little more complicated than that.  The best thing I can think of to do is look to the past to find a good analogy. 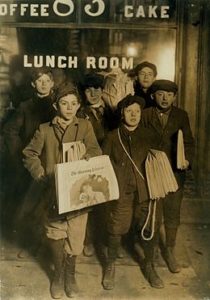 If you want to know why clickbait happens, we first need to look at a media outlet that made a profit off of sharing information: The newspaper. Yes, this oversaturation of fake news, the practice of outrageous headlines for a profit, and the articles created to inspire outrage in other people existed during the time of your great-grandparents.

In the late 1800’s, newspaper publishers in large cities like New York made money more differently than the subscription-based-newspaper publishers of today. Their business model at the time was to print a number of publications and sell them in bulk to homeless children, who would independently sell the papers.  The more papers were sold in bulk, the more a profit was made for the press.

So, the children, motivated by not wanting to starve, made a living by shouting headlines day and night. At best, these starving children would just be shouting past midnight and at worst, they would be actively making up headlines and fight rivals for the best spot with the most foot traffic.

It was also important to note that newspapers who sold in bulk did not allow these kids to sell back any of those papers that didn’t sell that day, so it was understandable that these orphans would be desperate to sell as many papers as possible because they would absorb monetary losses instead of the press. This format didn’t change until the newsboy strike of 1899.

News companies started to notice that the children who sold more papers were the ones that exaggerated headlines, and decided to make the headlines more scandalous to increase sales.

This lead to a type of reporting known as yellow journalism.

The term yellow journalism was coined by people who were well aware that the stories in the newspapers were highly exaggerated and poorly researched. The presses that were the most guilty of 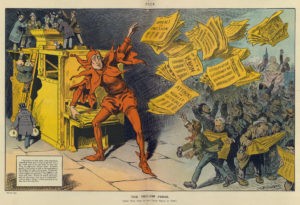 writing fake articles and scandalous headlines for sales were Joseph Pulitzer’s New York World and William Randolph Hearst’s New York Journal.  They had an intense rivalry and would do whatever it took to sell more papers than their rival.

Both the Journal and World used a series of tactics that were seen as underhanded by more respectable journalists at the time. The tactics included:

That is how destructive fake news can get.

It doesn’t take much for people motivated by profit to delve into shady tactics whether it is over 100 years ago, or today. The technology might have changed but our habits haven’t. But this didn’t happen forever, so what changed then and how could it solve Facebook’s problem with fake news? Wait for parts 2 and 3 to find out.

This article was written by the Purple Tie Guys, an Alabama SEO, Web Building and Marketing firm. If you want to read more content like this, check out our blog. If you want to book an appointment, click on the popup here!