Internet Marketing- Is it a Fad or a Mainstay?

In my time as a marketer, I have seen people from walks of life refuse our services. It is bound to happen in any business, no matter what you are selling. What makes it interesting, however, is the reason why they refuse. When we tell older businesses we use internet marketing, they practically panic. Their first response is to outright refuse the services we offer because they knew nothing about it. In their minds, internet marketing is at best a novelty and at worst a scam.

To them, internet marketing seems like a gold rush situation. By that, I mean various ‘gold rushes’ in the world of buying and selling in the global marketplace, like the stock market. These are times when promises of fast wealth meet with almost too many hopefuls that either has little knowledge of how things work in the industry they are trying to break into or are gambling on what little they have for success. When enough of these people get on the money-making bandwagon, the institution they are relying on begins to collapse under their weight. Eventually, it means the financial downfall of those who pin their hopes and dreams on a new resource.

So, it raises a few questions for me: What is internet marketing? How sustainable is it? Will it become a common staple in businesses once the glamor has died down?

We have a few comparisons that may be an indicator of where the future of internet marketing could be headed. The greatest of them was the speculation of how much the internet was worth in : 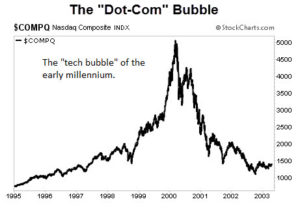 When the internet was first adopted commercially, there was a lot of hype that surrounded it. Back in the days when access required slow-moving dial-up,  many financiers, corporations, and other big league investors knew that this was going to make them rich. Investopedia explains,” During the dotcom bubble, the value of equity markets grew exponentially, with the technology-dominated NASDAQ index rising from under 1,000 to more than 5,000 between 1995 and 2000.”

When you see that much growth happen so quickly, you can’t help but take notice. That was especially the case for investors during the 1990’s. If you were to put the 80’s and 90’s in a time capsule, you would notice a strong sense of optimism and a naive sense of blind faith that would be reflected in American culture at the time. This naive and optimistic attitude also carried over in the world of the stock market, and it only multiplied when they saw the stocks for technology grow so quickly.

Stocks and investments are a really abstract concept, so I will briefly define it for context. When a company needs money for a venture, they sell a piece of the company to buyers in the form of stocks.  The price of the stocks is set based on how much the company is estimated to be worth, and how many are made. Stocks for businesses that last tend to grow slowly over time and keep growing. There is a low risk for the buyer if the company is old and has practiced well-assessed risks. The risk for the investor gets higher if the company is newer, or is pulling off a project with the investors’ money with no guarantee of success.

Some of the growth was legitimate. Technology companies that had made new products like Cisco and Oracle made calculated risks and grew 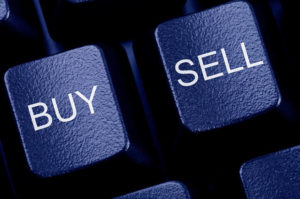 naturally. However, a bunch of that sudden growth in the technology sector came in the form of everybody trying to sell all kinds of things on the internet. If a domain name ended in .com, from ’97 to ”02 it was a new business trying to break in this new untapped marketplace.

Before there was even a term for ‘internet marketing’ investors were so convinced that they were going to make bank that they poured their time and money into these businesses that were starting out. Never had the phrase “shut up and take my money” been more relevant than at that time. People quit their jobs in order to sell stuff online full time.  A lot of money went into advertising, ‘getting big’ all with the promises of getting rich.

That all failed miserably.

The Bursting of the Bubble

There were multiple factors that contributed to the lack of profit for these starter web-based businesses. First was y2k. Computer programs before the year 2000, had everything dated in two digits. Everything. After 99, the clocks on these programs would reset to 00, a default that would shut down or restart the programs to a blank state. Including the computer programs that ran nuclear warheads.

The government and the private sector scrambled to fix that setback costing time and money. Soon everything seemed to be okay. Then, Japan, a technological giant that impacted our tech stocks, went into recession. Yahoo and eBay ended merger talks which affected the market. Microsoft lost a monopoly lawsuit in 2001. Pets.com, a joint business with Amazon, went out of business. Then September 11th happened, shattering the world trade center, along with the hopes and dreams of both investors and startup companies.

In the end, only 48% of these dot-com businesses survived the crash, which might sound like a lot, but they were valued at less than what was initially predicted. Some of them wound up even sued for lying to investors. The ones that didn’t survive got liquidated leaving many people jobless and out of assets.

What Does it Have to Do with Internet Marketing?

I am covering this point in financial history to point out two things. The first is to illustrate the disappointments to which possibly lead to jaded mindsets of today’s businesses being reluctant to have an online store in the first place. The second is to provide a template in which I can compare and contrast internet marketing to see if the speculation of market growth is valid, or if it is just excess optimism in a world of people trying to get rich quick.

I will draw the comparison in the next article.

If you like reading more about this stuff, check it out here on our blog! If you want to read about nutrition or learn about the unique types of mold in the world, click here and here!