I have mentioned many times in the past in conversation and in writing, that we are living in a world that is oversaturated with advertisements. It is a relatively recent phenomenon that came with the age of the internet, but the gist of the concept is that people are bombarded with so much advertisement, that they start tuning out the ads that do not feel relevant to their interests, emotions, or personal values. To put it plainly: If there is no emotional connection between the ad and the viewer, it will have no impact whatsoever on the intended audience.  In response to this phenomenon, advertising companies have been changing their tactics by creating ads with the intent of getting people to emotionally connect with their brand directly, with mixed results.

After some analysis on my part, I have determined the three components behind advertisements that connect with their audience: A strong emotional message, A targeted audience, and alignment of company values with the values of the audience.

When creating any sort of advertisement, you need to carefully consider: 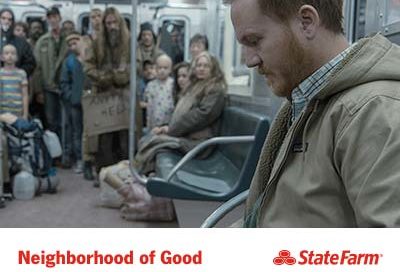 This commercial is sort of underrated, and it is a damn shame that it is because it handles the complex matter that it introduces with the right tone, conveys the right message to the viewer, and offers a solution to the complex subject matter in a tasteful way.

The ad starts off gentle music combined with a visual of a gentleman who is sitting on a subway and reading a poster that is about pet adoption, he is interrupted by a dog whining beside him and the camera pans to the same dog from the poster, that has somehow materialized as a tangible byproduct of that nagging guilt that most people feel after seeing or hearing a pet adoption ad.   Already, I can identify with this ad, emotionally, I want to adopt all the dogs to prevent their suffering but logistically I know that I cannot afford to do all those things, so the guilt slightly weighs me down just like the man on the subway.

The dog from the poster follows the man down the street and to his office, where the man comes across a Facebook ad that tells him to support the vets on his work computer. He turns to his right and sure enough, the veteran materializes and nods at the man. Again, emotionally, you want to help all the vets, but logistically, most people watching the commercial are burdened with the knowledge that they can’t afford to do that.

Cue the man sitting at a bar with his friends, being followed by the dog and the vet, seeing a news piece on the television about the rise of dropout rates among high schoolers, you know by now that the boy will materialize and follow this man around.  He is now followed by an entourage of various people in need that represent different causes that need to be addressed and it overwhelms this man that just wants to live his daily life without the weight of the world on his shoulders. But it keeps growing ever so larger.

It concludes when the man stops by a local community outreach center and decides that he is going to volunteer his time to this specific cause. The apparition of the boy nods in acknowledgment of his decision, and they all disappear as he enters the building.  A voiceover states, “You can lift the weight of caring by doing” and promotes State Farms Neighborhood of Good, encouraging others to volunteer.

Pepsi caught hell the moment the company released the possibly well-intentioned but utterly tone deaf protest commercial on YouTube. On a surface level, it seemed like a hell of an overreaction from the public to a seemingly harmless promotion, but if you analyze it piece by piece, you can realize why it was an insult to the audience they were trying to communicate with.

They start off with protest imagery with a crowd of young people with various races, religions, and hobbies. They are all smiling and interacting with each other like they are going to a concert instead of acting like they are legitimately angry or anxious about the issue they are protesting about.  It doesn’t sound bad at first, but if you saw a video of everybody crying at a 5-year-old’s birthday party as the boy blows out his candles, wouldn’t that sort of dissonance just seem a little out of place?

Then Pepsi muddles the message further by a celebrity appearance by someone who has never really been associated with the Black Lives Matter movement, who stops in the middle of a photoshoot to protest because a guy in the crowd flirts with her. Again, there is no context and it confuses the hell out of the audience.  Are they saying protesting is sexy? A fun activity that all the kids are doing just to hook up? And what does this have to do with Pepsi?

In an even more bewildering crescendo in this hodgepodge of a commercial, it ends with the celebrity just simply picking up a Pepsi and handing it to an armed policeman which lead to him drinking it and the crowd cheering like they just achieved world peace.  Wait, what did I just watch?

For the entirety Pepsi’s branding history, the company identified itself as Coke’s main rival and was known in the 90’s as the ‘cool kids’ kind of soda. Their core values were based less on political and somber topics and more on the latest fads in music and pop culture. Coca-Cola was the company that identified itself more politically and internationally. So for Pepsi to try and identify themselves with any sort of political movement kinda makes their brand and soda just fall flat. It is a pale imitation at best and outright identity theft at worst.

So what is their message? Are they saying Pepsi is so cool that it leads to world peace? That Pepsi is the key to preventing all the police brutality?  Policemen are just thirsty and it makes them cranky? What are you telling me Pepsi?