Have you seen the two-hundred-foot-long billboards in the country beyond town? Did you know that once billboards were only twenty feet long? But cars started rushing by so quickly they had to stretch the advertising out so it would last.”- Clarisse, Farenheight 451

While we haven’t gotten a fire department that would be starting fires, as opposed to putting them out, one of the major themes that the book Farenheight 451 predicted was the rapid growth of technology. It also unwittingly predicted the detachment of personal connections that come with the increase of technology, and the gymnastics advertisers and marketers have to make to catch up.

But their future didn’t shape exactly the same way as our present. Instead of fast cars, large screens taking up the entirety of the walls, and violent teenagers, we have rising gas prices, little electronic screens that take up our lives, and teenagers that are too lazy to go outside to get in said violent fights. Not too bad a tradeoff.

The point I am making, however, is that while our billboards are still 20 ft long, the landscape of billboard advertising has changed to match our current technological landscape.

We can now debut our advertising electronically, along with public service announcements, the time, and even the temperature.

But what makes it a legitimate form of digital advertising? Is it too dangerous to invest in?

So, we are going to be talking about the history of the digital billboard, its progress, and the progress it has made for advertising.

The Birth of the Digital Billboard 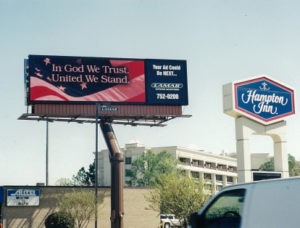 There is no definitive timestamp for the launching of the first digital billboard. However, I can tell you what I found based on my research, and you can decide for yourself when that was.

Unofficially, Daktronics, a South Dakota based advertising company claimed on their official site that they were the ones to have at least been the first to integrate the idea of digital display on outdoor billboard advertising. According to them,

“Some of the first “digital billboards” we sold were not 100% LED displays. Before manufacturing full LED displays, we sold products to billboard companies here and there, but most of these consisted of static displays with a simple message center integrated into the campaign displaying messages or time and temperature displays. Full LED displays were simply too expensive for billboard operators to justify purchasing. When we began attending tradeshows for the billboard market, we were practically unknown. In the year 2000, this began to change, and we started to get interest from outdoor companies.”

This digital billboard was sort of a visual hybrid with a 2/3rd to 1/3rd ratio between a digital and traditional format. The pixel quality was low and it was an expensive endeavor at the time, but the concept was intriguing enough for Lamar’s Outdoor Services to try it out.

Daktronics claimed that it wouldn’t further catch on until 2004-2007.

The job of any billboard on the road is to capture the attention of the passersby in traffic. That much is obvious. But when it came time to focus on the 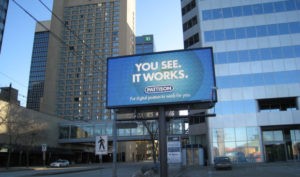 possibility of safety regulations, some people were worried about the potential damage that Digital Billboards could cause drivers.

The American Association of State Highway and Transportation Officials, (AASHTO), conducted a study in 2009, regarding that issue.

“Although some such signs use scrolling characters across a screen, and others use rotating
panels (called Tri-Vision or Roller-Bar signs), it is the LED technology that has the
greatest potential for capturing attention, and therefore, distracting the driver.”

This caused enough of a concern for highway beautification interest groups enough to bring it up in court. The Department of Transportation provided their own data and determined that this was not a problem.

The study concluded that while drivers certainly paid more attention to electronic billboards more than their nonelectronic counterparts, it was only by about 30 more milliseconds. It was not enough time to cause a drastic increase in accidents.

” The results were both well below the “currently accepted threshold of 2,000 milliseconds,” the study said.

A Conclusion to Part 1

So, we know how they came to be and how it affects the safety of drivers. This demonstrates that digital billboards are certainly a legitimate form of advertising with little ethical issue involved. But what sort of businesses are best for the electronic billboard format? Who responds to a billboard advertisement the best and what added advantages does the digital format have in comparison to its analog counterpart? The answers to these questions will come at a later date. Next week we will we look more at the” marketing” aspect of “digital marketing”. We will also examine the most effective ways digital billboards work for companies.